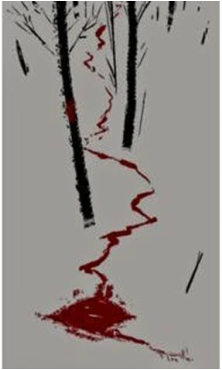 Avani spent her Saturday morning raking leaves and pulling weeds with her mom in the front yard and after lunch she went to a movie with Adam. She also did a little shopping and when she got home she was exhausted and headed to her room for a nap before dinner.
Two hours later the dance music on her cell phone began jabbing at her ear drum and she woke up with a start. It was Adam calling to say that he was at a party at a friends house and will be home late. Two minutes later, just when Avani was drifting back to sleep, she felt her blanket being pulled off her; she opened her eyes and looked under the bed, but there was no one there. Then a knock on her bedroom door made her heart convulse.
“Avani are you up?” said Mrs. Evans. Avani groaned and covered her head.
"Ugh! I'm going insane," she mumbled into her pillow.
“Ok, if you can hear me, I’m headed into work for a couple hours. There’s dinner in the oven...,” but that’s all Avani heard because she was already fast asleep.
Half an hour later she was sprung awake by a bone crunching sound, she got up and realised it was coming from outside the house. Avani opened her window. The air was thick with the smell of animal decay. Avani heard the sound again and what she saw sent a chilling wave through her body. Old Lady Marjorie had dug up a grave in the pet cemetery and was now chewing on the flesh of Mr. Willis’s dead Labrador. Terrified and disgusted, Avani shut her window, but before she could close the curtains, she saw two red eyes staring at her. Her blood suddenly ran hot and beads of sweat appeared on her forehead.
Old Lady Marjorie was in her closet last night. Trying not to show any fear, Avani closed the Curtains and reached under her pillow for her phone. It wasn’t there.
“What the hell!” she shouted as she began to strip the sheets off the bed looking for her cell phone, but when she heard her ring tone coming from the hallway, her heart catapulted to her throat.
Suddenly she heard footsteps ascending the stairs outside her door; she was petrified and had no weapon to defend herself. Then she felt it, the touch that caused her lungs to work over time; a hand was pulling at Avani’s big toe. She closed her eyes wishing it was all a dream.
“This little piggy went to market,” said a croaky voice. Avani opened her eyes and saw a frail, bent old woman stooping at her feet, her blue eyes staring into Avani’s grey ones.
“You like watching me do you?” she said, red sticky blood dripping down her chin.
“Well I like watching you too and you look very tasty Avani” Old lady Marjoree stared at the timid, helpless girl standing in front of her, her eyes were beaming red now and Avani felt as though the flesh would burn off her bones. Then she opened her mouth and she let out a cackle that made Avani’s ear drums throb with pain. Her gums were bloody and she had no teeth. Slowly, she forwarded towards Avani who was now struggling to open her window..
“Don’t run away from me child,” said the carnivore, rage growing in her voice, and she grabbed Avani’s hair and pulled her back inside the room. Avani’s heart was pounding so hard now, it hurt.
“Let me go you old hag!” she screamed. Fear and anger were fighting beneath her skin and she struggled to break free. But the old woman had unknown strength and pulled her closer and as she opened her mouth to Avani’s neck, Avani elbowed her in the stomach and she let out a cry that sounded like nails on a chalkboard. Avani then tried to pull free but the the old lady’s grip was so tight that her long black nails dug into her arm and she screamed out in pain. Blood was now oozing down her arm to her fingertips and Marjorie licked her lips and advanced on her. Avani ran to the window, opened it and began to climb out. Marjorie followed close behind and caught hold of her leg and began pulling her back inside, but Avani kicked her in the face with her other foot and scampered through.
“You foolish girl!” she screamed as she made her way through the window and began to crawl down the roof towards Avani.

“Help!” Avani yelled. “Hel-” Two scaly hands wrapped around Avani’s throat and stifled her screams. Unable to hold her balance she fell forward, Marjorie falling on top of her.
“Get off me!" Trying to avoid her snapping gums, with all her strength Avani pulled at the old lady’s hair. Tugging as hard as she could, she heard a slight ripping sound and realised that along with some hair she pulled off a piece of her scalp revealing what looked like rotting brain covered with sticky, slimy blood.
“Aaah! You little witch,” she yelled. Avani finally got her chance to escape, and almost reaching the edge of the roof, she turned around and saw two hands reaching for her. Avani, now scared out of her mind, thought of falling to her death or fighting to her death; she had no time to resolve her thought so she just jumped and landed safely in a pair of arms. But Marjorie wasn’t so lucky, she came tumbling after her and fell on the picket fence below; the wooden spike protruding out her back and her body exploded to ash.
Avani watched Mr. Willis as he put her down.
“I almost thought you didn’t see me,” he said.
“No, I saw you. I just like to be a little dramatic sometimes.” Avani smiled thankful that her mother had the fence put in two day ago.
“Hey Avani, what are you guys doing in the front yard,” said Adam walking up the street, looking peculiarly at Mr. Willis.
“Oh Mr. Willis just saved my life when Old Lady Marjorie tried to eat me, then chased me off the roof and fell onto the fence and exploded," Avani's voice was calm and she tapped Mr. Willis on the shoulder and he nodded in agreement, exhaling a giant sigh that imitated an exploding sound.
“Ha ha, very funny,” said Adam looking at his sister and his neighbour like thay just ate a big bowl of crazy.

Mr. Willis said goodnight and walked over to his house, but not before Avani hugged him so tight that he almost stood upright.
“Did I miss something? I thought you hated that guy,” said Adam when Mr. Willis left.
“I just told you what happened but you didn’t believe me...so,” said Avani.
“Fine! Don’t tell me. I don’t care,” said Adam stomping up the front steps to the porch, Avani at his heels. But when he stopped dead in his tracks and she crashed into him and started to yell profanities when her head hit his lower back, her second word was muffled by a choking gasp that escaped her lips. Avani stared helpless as  her brother was lifted off the ground in the second it took her to blink.
"You stupid boy!" Marjorie wrapped her decaying hand tight around Adam's throat and before Avani touched her toe to the top step to fight the old hag again, Adam was already flying across the length of the porch. He landed hard on the glass table, shattering it. Red started to bleed out of Adam's mouth. His back was bent too far over the steel frame of the table; it was broken.
"Noooo," Avani's knees dropped to the wooden floor as the last bit of happiness was drained from her body. With shaking hands, she held her head, pulling at strands of her hair as she watched her brother's twisted body release  its last breath. She clutched her stomach and rocked her body back and forth on the front porch while hysterically sobbing.
"Pest, maybe i will be eating your eyeballs after all," Avani heard the old woman's footsteps as they approached her brother and rage boiled beneath her skin. With a tear trickling down her face, she turned to Marjorie and whispered, "Touch him and you're dead."
Marjorie rolled her head on the heels of her neck and let out a cackle that shook the ground. Her eyes were glowing scarlet as she gazed into Avani's grey corneas. "When will you ever learn child," her voice was like gravel and she placed her long, frail, scaly fingers on Avani's face, delicately tracing the anger that coloured her cheeks red. "I can never die." her voice broke at the last word and she reversed her hand from Adam's face.
"NEVER say NEVER!" Avani yelled and remembering a self defence move her dad had taught her, she stomped on the hag's right foot as hard as she could. Marjorie screamed out, her gums shining in the moonlight, then with a swift move, Avani kneed her in the stomach. As another shriek echoed through the deserted street, Avani spun on her left foot and with her right foot out, she was about to jump kick Marjorie in the chest, but was caught by the ankle and spun five times diagonally before falling to the ground. Avani groaned as she slowly picked herself up, but a soft crack made her wince. A sharp pain stabbed at her ankle and warm fluid escaped wrapping her bones, but Avani kept a poker face and hid her fear that she was going to die tonight.
"You were always foolish, child!" the hag said as she advanced on Avani. Her voice was almost melodic now as she tickled the tips of Avani's black locks with her fingertips. "But you are beautiful...and your blood will make me beautiful again." Marjorie's eyes widened like it did the first day she met Avani. She must have heard the galloping from Avani's chest as she licked her lips and took a step closer to her. "Don't worry, you're juices won't go to waste, i'll make sure of that. With your porcelain skin, you will keep me young for a whole year!" She was so close to Avani that she could smell the dog blood on her breath.
"Would you at least let me see my mother before..."
"NO!" Marjorie snapped."You will see no one!" She grabbed Avani by the shoulders and pressed her ear against her chest. There was a soft growl in her throat and this agitated Avani and she pushed her off with all her might.
"You took my brother's life!" she said turning around to look at her brother, bent beyond repair.
"He was a waste," replied Marjorie sneering at Adam's dead body. Rage boiled inside Avani and watching the pieces of glass on the ground, an idea stirred in her head. "Let me at least say goodbye to him before you slaughter me like a p..."
"Oh would you stop babbeling child!" said the hag who was growing impatient. She spun Avani around and dug her nails deep into her chest with excessive force, breaking through her skin like it was made of paper, and pulled out her heart on its last unsteady beat.
"Finally, some quiet." Marjorie dropped Avani's lifeless body to the ground and licked her dead heart in her right hand like it was a lollipop.
"Mmm, i knew you'd be delicious," she held Avani by her ankle again and started walking down the front steps dragging Avani's lifeless body behind her.

A strong mist polluted the air concealing the moon until it was almost out of sight. Avani's eyes stood open wide with horror, as her limp body disappeared into the darkness. All that was left of her, was a trail of red.