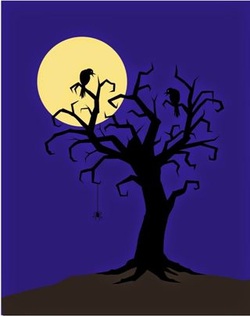 Robert Evans
Loving husband and Father
Born: May 17th 1967
Died: August 06th 2010
Beyond is the infinite morning of a day without tomorrow.


Avani’s thoughts lingered on the memory of her father for most of the drive to Extoritch Creek. The thought of the black casket being lowered six feet under will be etched in her memory forever. Her body felt heavy with the weight of anguish, she sighed as a tear cascaded down her pallid cheek. She gazed sullenly out the window at the blur of enormous oak trees that lined the side of the roadway, littering the air with their foliage of yellow and amber, wishing that this was all a nightmare and not reality ripping apart her life. Her father was the only man she loved and respected. He was her confidant and her best friend, until two weeks ago when his life was taken and hers was shattered. Another tear slipped down her cheek.
She looked across at the boy sitting next to her in the backseat of the Volkswagen Bug; though only two minutes apart and beside the fact that they were a paternal twin, Adam couldn’t be more different than Avani. She watched his hazel eyes hypnotize, by the little gadget in his hand as it made beeping noises with every click of his thumb. Absentminded by what was really going on, Adam chose to occupy his time with various Nintendo games. His collection grew to twice the amount only a week after Mr. Evans passed. He was never one to sit and talk about his feelings, or cry and moan like Avani did. He always kept it in, just like their mom; no expression, no emotion, no feeling. She envied him for that; wishing her heart could turn to steel, trapping all feeling of anguish, not letting it escape through her soul’s window. She watched her mother’s reflection in the rear view mirror, her chocolate hair danced in the wind while her grey eyes were wide, focused on the road like it was going to open up any minute and swallow the car. No real emotion covered her face, so as usual Avani felt alone.

She stared out the window again. Her chest heaved as her heart tried to repair itself. Her father was dead and not coming back, this she was sure of, but moving hundreds of miles away from the place she had known all her life, the place she learned to ride a bike, the place she had her first kiss, and then punched Tom Webber for groping her left boob on the car ride home from school, the place where she kicked both her father and brother's butts playing basketball every night after dinner, the place where her dad was laid to rest; away from her only home, this, she was not sure of.

The screech of the car brakes awoke Avani from her unfortunate reverie. Her grey eyes filled with fresh tears of despair as she saw the beginning of a horrible future staring back at her.
"Okay, everybody out," said Mrs. Evans, as she opened her door and departed the car. Avani watched her mother bend and stretch, trying to untie the knots that threatened her back from the four hour long car ride.
“How could she do this to us…to me,” she thought as her eyes followed her mother, now doing duck-like squats across the front yard. Avani hesitantly enclosed her hand around the door handle, but withdrew when she felt a gentle tug on her ponytail, a signature move of Adam’s awkward attempt to get her attention. Avani looked at him and waited for words, any words to escape his lips. But as usual... nothing. He just made silly, childish faces at her. It’s like his tongue would not allow him to produce words of comfort, so he subjected himself to playful antics to try to ease her tension. Knowing this, Avani just played along and tried to force a genuine smile which usually satisfies him. Her efforts were futile. He sighed and after a couple hour-long minutes, they both turned in opposite directions as the silence forced them out of the car.
Avani walked toward the front steps of the house and with the tear stains plastered to the back of her palm. She, like her mother and brother, tried her best to mask her face with an emotionless façade and accepted the fact that until she turned eighteen, this was her house and she would have to swallow whatever else that comes with it like a jagged pill.