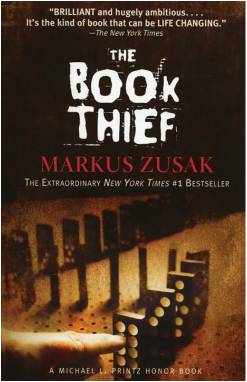 As I read the first page, I was transfixed by the realization that death himself was the narrator of this story. His vernacular penetrated my mind with words of beauty that flowed, and pulled, and hypnotized in a way that only death could. I was lured and taken in to his word-lust and I would have given my soul freely for more.

A little boy on a train with his family, didn't know he was being followed. He didn't know because he was dead, and death, his follower, had taken his soul. But Death didn't leave, he stood there hovering as he watched. He watched the boy's sister awake from sleep and the torture grief inflicted upon her heart as she discovered her dead brother. He watched as they buried the boy, then surprised, he watched her steal her first book.
Death became fascinated with Liesl Meminger (as he was fascinated with metaphors as it may seem since he only writes IN metaphoric sentences). He followed her existence, a predator to his prey as the ugliness of WWII peeked it's head over the skies of Germany.

(Spoilers Included)
Her adoption, he witnessed, as she was transferred from her mother to foster parents. Liesl's affection for her foster father, Hans Hubermann, quickly grew and evolved into daughterly love. She felt comfort and trust in his embrace. Her foster mother Rosa, took some time, as her attempt at love was far more aggressive, but it was love non the less

Liesl also found comfort in the first book she had stolen. Though months had passed she took it out and held it, the memory of her brother and her mother somehow binded between the pages she never read until she was taught by her foster father.


Rudy Steiner, Liesl's neighbor, was a curious little lover. He loved girls and he loved Jesse Owens (in totally different ways, I might add) But he was passionate to say the least, but being 10 and having that passion, some of it was bound to be evaporated especially when you learned who a Jew was and why it was not right to want to be black (like Jesse Owens) and on page 60, I felt  a little of Rudy's passion along with his childhood was taken by the words that escaped Alex Steiner's (his father's) lips.

Max Vandenberg, a Jew, an innocent soul hidden within the depths of the Hubermann's basement, represented the sting of worthlessness every Jew felt during WWII. The stench of being cast aside, unloved, a demon to society, bled from his pores and pity was all you felt for this man. The friendship between him an Liesl was admirable.


The war was pulsing through the veins of Germany. It infected and infested the minds of the German people and spread across the land in a wildfire of death and torture and we were brought along for the ride.
Zusack's writing delves deep within literature, drowning words till their last breath escapes then he forms their bodies into sentences, impregnated with the souls of each word.

I loved the format, the assembly, if you will of this book. The short chapters, the brief summary of what's to come at the beginning of every part. It was brilliantly and thoughtfully designed.


I took a week to finish this, I think that's the longest I've ever taken to finish a book! It wasn't bad not in the least...it was just so damn delicious, I wanted to savor it!
The writing, the words, the sentences they formed, it caressed my brain, and I went as slow as I possibly could, not to miss a single metaphor. Zusack is brilliant! And is now one of my favorite writers.