The Return (A Titan Novel)
Review 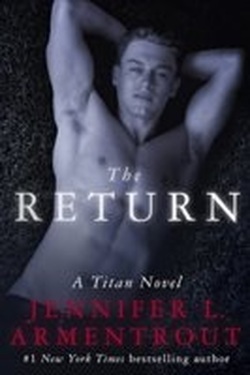 Click photo to buy
The Return (A Titan Novel)

Spoiler for those who have not read The Covenant Series

Another masterpiece to add to my JLA vault. I was devastated during my read of Deity (3rd covenant novel) as I read myself into a stupor after realising the words were leading to an outcome I was definitely not content with at all! Seth was not going to get a happy ending and it physically pained me after the fact that I fell madly in love with his character during Pure! (2nd Covenant novel) And don't give me grief about falling for a character...it happens! I fell. Let's move on 😋

After the series ended and although it was sweet, there was still a bitter flavour mixed in as my love, Seth, had to sacrifice EVERYTHING to prove his love and his redemption! Now I won't lie, I bawled. The ugly crying started and it possessed me! I was raining Seth tears all over Aiden and Alex's stupid happy ending!! But like all storms there is a rainbow and this rainbow came in the form of Seth's golden body on the cover of his own freaking novel!!! I was ecstatic when I heard there was a spin off and Seth, my lovely badass Apollyon, got to continue his story! So enough with the reminiscing...let's get on with the good stuff!

So Seth's story begins a year after Sentinel (the 5th Covenant novel) ended. He's spent the time doing the Gods dirty work and he's miserable! But because of his past poor choices, it's a fate he believes he deserves. But then after an unexpected assignment given by his personal pain in the ass, Apollo, he meets Josie. He becomes immediately fascinated with her and what she is, and his curiosity is stretched further to Apollo and why he would assign him to protect this girl. What neither of them realized was who Josie really was and what the fates had in store for her.

In this first book we dig a little deeper into Seth's past, the past that Alex was never interested in knowing during their time together, is revealed and Josie is the one to gently coax it out of him. Seth didn't have an easy life and reading every word brought a tightening ache to my heart. But Josie is patient and finds that honest and tender side of Seth and brings it to the surface. And I believe the kindness and respect she shows Seth is what he needs right now. But the battle within him becomes furious when he starts to develop feelings beyond the physical attraction he first felt for Josie. He doesn't believe he deserves anything good and he dubs himself a monster when Josie admits her feelings toward him. He is fixated on the past and is still finding it incredibly difficult coming to terms with the consequences of his actions. And to make matters worse Josie reminds him of Alex. The one person who shadows his present with the constant prodding of horrific memories and it seems that history is on replay when situations become all too familiar.

There is one scene that wrapped my heart in a warm fuzzy blanket and that was when Seth finally realized that Josie saw beyond his mistakes, beyond all the bad crap he did, beyond the Apollyon. She saw the good in him when he was blinded by his own self-hatred and self-condemnation

Seth's character development is also very prominent in this book. Although his arrogance and smart mouth never left him (and we love that), his maturation seems to blossom as he becomes more open with his true identity and his feelings for Josie.

Josie is a heroine I could become great friends with. I was a bit guarded when it came to Seth's love interest. I wanted nothing short of perfect for him but I was pleasantly surprised with Josie! She is strong minded and cunning. And with her world turned completely upside down after the ramifications of what happened a year ago, she should have fallen to pieces, but no, she handles it with bravado. Josie may not be the badass chick that we all thought she ought to be since she was created for Seth, she's sweet and compassionate but never naïve. And after everything, I think Seth deserves a little sweet compassion right now.  Plus I also think based on how this first book ended, Armentrout has plans for our little Josie to develop into her own with the mischievous influence of Seth and with her transition I think there is a lot in store for sweet Josie to become as lethal as her counterpart.

The world building in The Return is reminiscent of the covenant series, so there was no disappointment there! Plus some old characters we love return to fuel some extra comedic release into the story.


Now this is an NA novel so I cannot finish this review without admitting the toe curling romance that transpires between Seth and Josie. Seth showed us that his mouth not only spits out words of sexual innuendo that is the root of his very sensual imagination but that he can take those thoughts and make them into oh so amazing actions that will cause you to crave a very cold very icy shower!

This book is hold-your-legs-tightly-shut amazing! And its all because of the wonders that is Seth! ❤Another fast paced thrill ride that can only be a result of JLA's imagination.

The Return was a fantastic start to the Titan series, and I absolutely cannot wait to see what happens next!