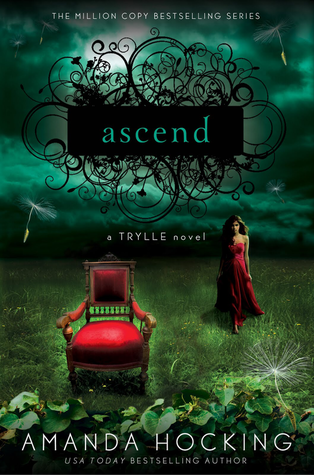 Click photo to buy on Amazon
There's so much I wanted to say, but all my thoughts got into a big old jumbled mess! So it took me a while to compose this review, but I finally did so here goes.
Knowing how much I disliked the first novel, I was surprised that the noun 'love' would even be associated with any of these books, but it is, cause I LOVED this last installment!

Synopsis (Spoilers if you have not read books 1 & 2)

With Elora's condition quickly deteriorating, Wendy has been forced with the challenge of ruling a kingdom she initially had no interest in or cared for in the least. But as certain events transpired, she found herself playing the part and performing her duties with an iron fist. Her upcoming nuptials to Tove was vastly approaching and Wendy, although she was marrying a man she didn't love, actually looked forward to it for the sake of saving the kingdom. But was the price too high to be paid? Or would she listen to her heart when it called out to someone else? Someone she never thought she would fall so deeply in love with. Someone who contradicted what she thought she knew about love and gave her the gift of knowing what it could be.

Would her fight for equality and change be obliterated by Oren, when he tries to start a war on her wedding night? Would her reign fall before she's even crowned? And would she sacrifice herself to death to save the kingdom and its people?


All these questions and so much more are answered and Hocking did it brilliantly!


There are still a few issues I had with this book, but I'm choosing to put those aside for this review as I think I included enough negativity in my previous reviews of this series so far. So I'm going to give you all the good stuff! You're welcome :)


Ruling a kingdom when you're seventeen and having people who are almost senior citizens listen and take orders from you is a heavy task, but Wendy somehow made it work and although she didn't do it flawlessly, she did a damn good job and I was impressed by her maturity and strength. Even though she was emotionally breaking piece by piece, she held firm and made herself known as the future Queen and ruler.


I was immensely surprised by Wendy in this book! Her character development boarded a rocket ship and zoomed away from planet annoying to planet 'Who the heck are you?!'
Her character was almost unrecognizable at times compared to her start in Switched, but it was believable, and I really liked her change alot! She became brave and bold and she was positively strong (sometimes a little too optimistic) on her intent with killing the King, but she handled herself with dignity and she made people respect her and this was shown especially in the war room. I think she shined her brightest during those meetings. She held all the attributes of a Queen

Tove was a breath of fresh air. He breathed life into every scene he was in. I liked him from the start and I was happy that Hocking didn't interfere with his character or change his personality in any way. He's kind, honest, a wonderful friend and an amazing husband. Always supportive and willing to listen and discuss before jumping to conclusions. Honestly if he wasn't gay and there wasn't a certain other fellow in the picture, I would have chosen him for Wendy.


I loved Tove and Wendy's friendship. Their communication was always on a mature level and even though they were never in love they understood each other, defended and stood by each other and it was admirable.
It's sad that they couldn't be themselves and and had to marry each other to benefit the kingdom and it's people.


'"You know it's almost a shame we don't love each other." Tove said, with his arm around my shoulders. " We make an awfully good team."'
"But at least we get to be with someone we enjoy" - Tove


I never really understood Finn's character. He's always been just a big puzzling question mark and although there were scenes between him and Wendy that were supposed to be sweet or sad, it just left me feeling awkward and even more confused by his character. I was happy Wendy came to her senses and stopped it, because she was right he can't just come to her when he feels like it and regret it later. And I think Finn just liked the idea of Wendy. Being with her would always have been rushed and his duty as a tracker would always come first because that's all he really knew before anything else. I was happy with the way things turned out for him in the end though. Everyone deserves a happy ending, even you Finn... You confusing mind boggling man :)


"You deserve all the love a man has to give"


And thank God you were that man to give it!
There's no denying it, I loved Loki from the start! His wit and sarcastic humour was refreshing and I blushed like a little school girl every time his character made an appearance. But Loki wasn't just a joke on a page. He was smart and he always gave Wendy her chance to shine. He never overpowered her or belittled her. Her opinions always mattered and she was never told no before he got a reason to say yes.


I loved the idea of the 'Capulet and Montague complex' to their relationship and I was rooting for their romance from that moment when their eyes couldn't let go of each other in the palace dungeons in book 2.

The dance at her wedding reception... His presence could have moved a mountain. He stole my heart in that moment. The way he held her and glided her and looked at her. I know every girl that read that scene wished it was them dancing with the Vittra Prince.


Although I loved when they finally got together and I was fretting and squealing like a fat kid who just tasted chocolate, I didn't like the occurrences that led up to it. She was still married to Tove and having slept with another man, even though it was Loki, it still was disrespectful. Tove was always honest and I just felt uneasy about the situation.


The scene where Tove asked if Wendy loved Loki was heartbreaking. He knew there was no future in their marriage and he wanted to share a life with someone he loved. Asking for a divorce was the best way to do that, but it still hurt to read. It was almost like he signed the permission slip, giving Wendy and Loki his blessing. I felt the urge to reach in and hug him, he was such a beautiful person.


But it all worked out in the end.


As with Wendy, I didn't really care for Elora's character at the beginning of this trilogy. But in this book, I felt nothing but admiration for her. She became more of a mother and a mentor while still maintaining the elegance of a Queen. She became less introverted and opened up more to Wendy, revealing the love she hid for so long. And on her death bed she finally broke her shell and admitted that it's ok to make mistakes. It's ok to love with your whole heart and sometimes you have to put yourself before the kingdom or you would never be happy.


Initially whilst reading my mind was focused on a four star rating but that ending was close to immaculate!
Everything was tied off beautifully. All questions were answered and that glimpse of the future was just the lovely golden bow on the package.


I had to take off half a star because parts of the narrative and dialogue wavered a little to its previous C grading as it was in it's predecessors.


I wouldn't say I loved this series as a whole because I had a lot of issues with books 1 & 2 (Switched & Torn) but the finale and this final book wrapped things up amazingly well with a fast paced thrill ride including love, friendship, action, murder, romance and maybe a beheading 😯
I was very happy with the outcome.