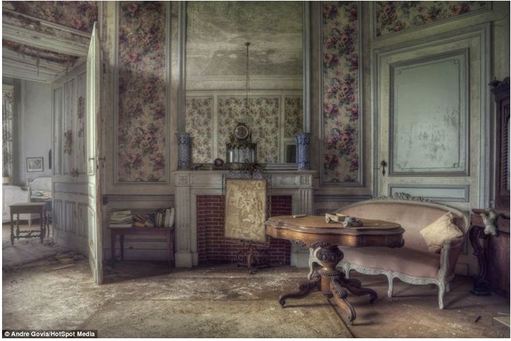 “Ugh, it smells like grandma,” said Adam pinching his nose. It was like walking into a giant cave. It was dark and the air was damp and cold. The lights didn’t work and there was barely any furniture. A lonely wooden rocking chair stood in the right corner of the living room and an oriental rug was draped on the floor in front of it. There was a bookshelf with no books and a fireplace that stored a mole hill of dust. The kitchen looked as promising as the living room; a big empty space and a rusty old stove was all they could find.
“Mom please tell me you have a drawing for inside the house as well,” said Avani, tip toeing over the cracks in the flooring. But Mrs. Evans was busy lighting candles and placing them throughout the house. Avani didn't remember seeing the handlebag before now, but it hung from her mothers left arm filled with candles. Soon enough the house was illuminated with candlelight.
Avani continued inspecting the house in silence and as she made her way up the steps to the second floor, she was greeted by an enormous portrait of Grandpa Evans covered in dust hanging on the opposite wall at the top of the stairs. Avani gave a cold hard stare at her Grandfather and turned right continuing down the hall. The bathroom was the first door to the left and the next door apparantly was Adam's room as he was sitting on the floor, Nintendo in hand, concentrating hard. There was onelast door to the end of the hallway and Avani turned the black knob and entered. The lit candle in her hand radiated its light and made the room glow amber. Avani tilted the candle and allowed a few drops of its wax to fall onto the windowsill, she then turned it upright again and placed it on the hot wax, holding it still till it stuck.
"How could this happen to me?" she thought again as she struggled to open the only window in the small room. Why did you have to leave us dad?

Avani put her head through the window to get some fresh air, but all she got again, was the putrid smell of death. She looked across the street and saw old man Scrooge had just finished digging a hole and was placing what looked like a bag of potatoes into the ground. Suddenly the man caught sight of her; he tipped his hat and gave her a crooked smile, which was more like a twitch of the mouth.
“Eww, what is this, the neighbourhood of the elderly,” she said silently and she ran out of the room and into the east room where Adam and Mrs Evans were chatting about where to place his bed.
“Mom!” Avani started but Mrs. Evans closed her eyes and raised her hand.
“That’s enough Avani,” she said. “We don’t have a choice, all the money your father left us paid off our debt. We just have enough in savings to fix this place up a little. Your uncle Henry offered me a job at the Extoritch Museum and they need a bus boy at Miss Phillys Diner so Adam will be working part time.” Avani barely knew her uncle and had no clue who Miss Phillys was but her heart fell into the depths of her stomach when she realised how much planning her mom accomplished in those two months. She looked at Adam, who was clumsily measuring the space for his bean bag chair with his feet, then back at her mother whose eyes were puffy and dark. She hated it here but she put her feelings aside and kept her complaints to herself.
“I’m sorry Mom,” she said and walked over and hugged her mother. “I’ll help fix it up. It’ll be great.”
Although Avani said the words she still had a lot of reservations, especially about Old Lady Marjorie, but she gave a convincing smile and changed the subject. “I have onlyone question.”
“What is it?"
“What is the man across the street doing?”
Mrs. Evans eyebrows pulled together and she went over and looked out Avani's window.
“Oh that’s Mr. Wilson, our other neighbour. Looks like his dog just died.”
Avani's eyes widened “What! Are you saying that that’s a-a-“
“Pet cemetery!” shouted Adam over Avani’s shoulder. “Oooh animal ghooosts,” he said in a spooky voice.
“Adam you pig!” Avani began biting her nails as panic travelled through her nervous system.
“Pig huh? Well I better look for a shady spot then,” he said looking out the window. “Hmm, maybe under that enormous tree, what do you think?”
“Ha ha, very funny; Idiot!” and she tapped him on the head. Their laughter subsided when two short honks were heard at the front yard.
“It’s the movers,” said Adam and he ran downstairs to meet them.

One month had passed and the house still looked like a slab of concrete but a well manicured slab of concrete. Mrs. Evans stuck to her plan and started the renovations herself. Two coats of white paint and the little flower garden brightened the entrance. The grass was coming in well too. There was still a lot to do, but her pay cheque wasn’t enough for the entire renovation, but Adam and Avani both put in the time and the house was shaping into a home. There was even a welcome mat placed at the front door.
Mrs. Evans became the Curator at the museum so her Degree in Creative Arts came in quite handy. Adam was the number one buss boy at Miss. Phillys diner and Avani started school at Extoritch Secondary. Now it may seem that everything was going swimmingly and it was,except for one little hindrance and a few elderly nightmares.