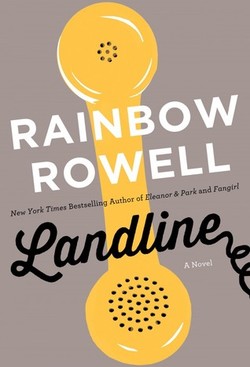 ​I don't know where to start! I guess I'll try the beginning.
Ever wish you could go back and change the past? Undo the wrongs and make them all right?
Georgie McCool got that chance and it was interestingly unique in a way that only Rainbow Rowell can bring magic into a realistic world and make your heart bleed for fictional characters you've only been introduced to hours before.
Let's just say I would never look at a yellow rotary phone the same way again!

Brief Synopsis
Thirty seven year old comedy writer Georgie McCool thinks she has it all. The perfect husband, two beautiful girls and a job with her best friend, that is transitioning to new heights in the writers world of sitcom TV shows.
But as Christmas vastly approaches Georgie finds herself having to choose between a grand job opportunity and the annual Christmas vacation with her family at her in laws house; she chooses the former and is weighted with guilt that latches itself on to her butt and rids her thoughts of anything to do with writing and basically inserts a slideshow of her past and everything to do with her husband, Neal Neal Neal.

This causes the rift in her marriage, that she knew existed, but chose to ignore, to open crater wide leaving Georgie on the edge of falling in!
Neal feels betrayed, always being second fiddle to her job and Seth (her best friend and co writer). Georgie doesn't realize this until Neal abandons communication by not taking her calls. And as she wonders if she ruined it all for good, she decides to put down her cell phone (that might as well be a paperweight) and try Neal one more time on the old landline phone in her childhood bedroom at her mom's house.
Neal picks up...
Her heart races as he apologizes but something seems strange. Neal begins a conversation about events that happened almost 20 years ago, and when his father (his currently dead father) comes on the line, Georgie thinks she's going mad!
Or is she? And could this old rotary phone be a magical portal through the line to Neal in the past? And discovering this, could she fix the events that led to a disappointing marriage in the future?

Yellow rotary phone that could call the past?
Yes people I'm talking about a time traveling phone! And when I figured this out my mind was blown by the brilliance that Rainbow sprinkled all over the pages like confetti on a cupcake and I devoured every bit until my heart was fat and contented.

Landline is Rainbow Rowell's second adult novel, her first being Attachments, and as with attachments the writing is stupendous!
This book is not just well written; it's exceptionally written. If I could write my review just about how magical the writing is, I would. But then I would be savoring only one part of what made the entity of this novel the sweetest most luxurious treat Rainbow has created.

The characters are dynamic. They are as real and flawed as you could get and that is what I LOVE about Rainbow Rowell. She doesn't give you characters from the pages of a magazine, she gives you real everyday characters that you could pass by on the streets. And I fell in love with all of them.

Georgie
I found myself relating to Georgie quite a bit.  I connected with her emotionally and that made me love her even more. She is not high strung and gets by trying to solve problems with irrational thoughts and when a few escapes? Let's just say her tongue makes more mistakes than her hand writes.

Neal
Present-day Neal wasn't very present and that was a bummer because I really enjoyed reading his quirky (younger age) humour His personality made me understand why Georgie fell for him.

Seth and Georgie shared a friendship I wish I had with a guy. Their banter hit the sarcasm nail right on it's head. The quick wit and dry humor was borderline sexy and fit their profiles as comedic writers.

The secondary characters were all well developed and added that extra flare. The kids and especially Heather brought a lightness to situations that were immense and weighted with marital grit.


The dialogue was on point! It exploded on every page! I found myself laughing out loud at times and I couldn't get enough of it! Especially the Hobbit references (Poor Neal)
:)


Rainbow Rowell did it again and it was magnificent. Georgie and Neal took us on an inspiring journey through the forest of love and even though you may stumble and sometimes fall, even get bruises, you still pick yourself back up and start walking again.

I am not married and I do not have experience in the field, but I am human and Rainbow poked and prodded at every emotion I have within me until it sparked! I love this book for everything that it is and everything that it made me feel.
All the stars in the galaxy 🌠