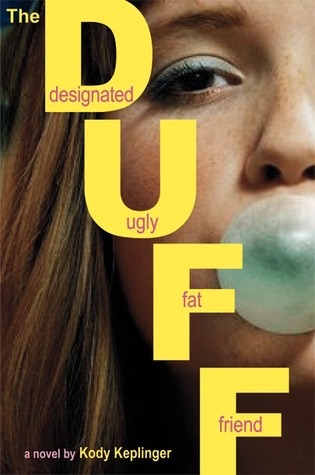 Click image to buy
Synopsis
Bianca, 17, has a semi handicap when it comes to socializing, in that she finds it unnessary to say the least. But her friendship with two girls she’d known for years, can break no bond, except if they utter the words Wesley Rush, then she’d outright want to duct tape their mouths and probably stab her fist through a wall. See, Wesley Rush, named the man whore, womanizer and downright male slut of high school, was now a a boy she layed a huge one on at a club where her friends enjoyed the dancefloor and she with pent up anger and a momentary lapse of judgement and losing her freaking mind, enjoyed the escape of kissing said manwhore.

Alright let’s not get too far ahead of ourselves. Bianca’s lips taking advantage of Wesley was not her first encounter with him. No, on their first encounter she threw a drink in his face after he labeled her the D.U.F.F. (The Designated Ugly Fat Friend) and tried to form a friendship with her so he could get the opportunity to hook up with one of her friends.

Second encounter, labelled The Kiss/Slap encounter. Bianca had just discovered the stressful news of her parents failure of a marriage and it turned into a heated ball of anger, sorrow and confusion in her chest and she wanted it out, to forget, to make it just go away. So she lunged at the one person sitting next to her and that was Wesley Rush. It turned into a raging fire of hormones and lust and ended with a ear splitting slap. Wesley’s face the target, lol! (poor guy didn’t even see it coming)

This was the calm before the Bianca & Wesley hurricane.

Bianca had a tendency to bottle her emotions. She remembered all the bad happenings in her life and it would build up to near explosion and Wesley was the bright orange life saver she clung to to rescue her sanity from drowning. He became engulfed in her mind when her life seemed to be spiraling with only bad. her escape from everything she didn’t want to face and that included her own thoughts. Her body craved him, the itch she couldn’t stop scratching, her own personal version of crack…the Wesley drug.

The word Duff haunted Bianca, it became the definition of who she was. She compared her being to the status of the Duff, in a negative way and as a result lost her true self. And what she thought would be a meaningless fling started turning into something more.

The situation with her dad and the drunken slap, when Wesley intervened, rescuing her, this time by stepping in himself and punching her father, she became confused and an internal battle with what she felt and what she thought began. On realising this, after waking up in his bed the morning after, with the fear of falling into the never ending Wesley Rush pit, she made her final decision to cut ties and end it but not before Wesley’s heart flew into her hands.

A note left on her desk by the womanizer himself, – “Wesley rush doesn’t chase girls, but I’m chasing you.” This confused Bianca even more. He couldn’t possibly be falling for her, she was The Duff! But yes, as much as she fought it, he became a part of her and after everything with her family slowly being resolved with long talks and apologies, Bianca made the right choice or I should say her heart did

Really strong protagonist; Bianca wasn’t ditsy and fragile when it came to her inner thoughts, which was refreshing. She was sassy and true to herself and never followed the cliche crowd. She actually scorned them and laughed at their demeanors toward everything that was a social trend.

Too short! Too freaking short! The story was rolling along so amazingly well and I knew the inevitable was coming as my thumb held on to the very few last pages, but when i got there, I couldn’t believe it was over! I wanted more…so much more! Where is the rest? Did my book come with only half the pages?!
Okay, okay, I will be honest. It did end on a beautiful note (pun soo intended), and I do love fast paced books, but this one? I wanted it to take it’s time, although I guess Bianca was a girl who liked to get to the point, in the bedroom and out, and the book reflected that in its 276 pages (too short!).

By the way, saw the trailer and I was So disappointed!! They made it into the typical teen movie…distanced from the book way too much ugh!